In Canada, around 300 million spruces are planted annually, 90 million of which are planted in Quebec only, and cover many thousand hectares. Spruce planting has remained unimproved for complex traits such as wood quality or pest resistance, because of the high assessment costs and long evaluation time in field testing. With the progress made in spruce genomics, the timing is right for major forest sector players to partner in moving genomic selection tests (GS-tests) toward application at an operational scale. GS-tests makes it possible to predict future performance of young trees and thus speed up selection, ensuring new plantation stock is more productive and resilient.

Genomic selection tests (GS-tests)—in this project called FastTRAC, for Fast Tests for Rating and Amelioration of Conifers (in French, Tests Rapides pour l’Amélioration des Conifères) — are diagnostic tools/procedures that were developed in Quebec over the last 10 years for spruces, and make it possible to rapidly predict the genetic value of trees used in breeding programs at a very young age and for very large number of trees and for a variety of traits. The procedure is based on multi-loci genotypic information called genomic profiles (see diagram). The FastTRAC approach differs from conventional breeding in that an estimation of trees’ genetic value can be obtained at a very young age (or seedling stage) through their genomic profiles, which can be obtained in a few weeks/months, instead of waiting for them being evaluated in the field for up to 30 years for some economically and environmentally important traits. 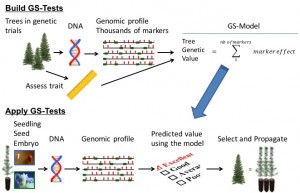 To develop for a species and a breeding population a GS-test for a trait of economic importance such as tree volume, wood density or pest resistance, the trait must be assessed from few hundred mature trees present in plantations established by tree breeders in the past. Next, the unique genomic profiles of trees for which the trait of interest was assessed must be obtained using a large number of genetic markers. A mathematical model is then built to enable the genomic profile of trees to be “linked” with their plantation trait values. After validation using independent data from the same mature plantation, the GS-test can then be used to predict the genetic value of any other tree from the same population, the latter being at any stage (such as young seedlings or embryogenic cell lines). To carry out the GS-test, only a small amount of DNA of each candidate tree is needed from which its genomic profile will be obtained.

Results of our recent studies have shown that in excess of 90% of the gain normally obtained with the conventional long-term rating approach using field testing over long periods of time (tens of years) can be obtained with FastTRAC applied to young trees or seedlings of the same breeding population without having to evaluate them in the field. Young trees for which the genetic value has been predicted using their genomic profile can be ranked relative to each other and the best ones can be selected to be vegetatively reproduced and used in reforestation programs without having to wait for their mature stage assessment. Moreover, success of vegetative propagation is much higher with young trees. Genomic selection makes it possible to generate highly significant economic gain because plantations with new genetically improved stock can take place a generation earlier while giving more flexibility to tree breeders to tailor their improved genetic stock as climate change evolves or to develop new breeding objectives in order to meet demand for new end-products on global markets.

Our first objective is to undertake at the operational level all of the above-mentioned steps of genomic selection for the advanced tree breeding populations of each of the three major Users (QMFWP, JDI, NBTIC), and this for both white spruce and Norway spruce. Hence, these three partners will benefit from FastTRAC GS-tests tailored to their specific breeding program and environment, and they will be in a position to use them to predict the genetic value of thousands of trees (seedlings from crosses, cell lines, young trees) and proceed with selecting and propagating the best trees for reforestation.

The main target traits are height, stem diameter, wood density, microfibril angle (MFA), and pest resistance. These traits are economically important to the forest sector partners, given that height and stem diameter of spruces are the determinants of volume production, and that wood density and MFA are major component of their wood quality, providing additional product value. Improving weevil resistance in Norway spruce is also a priority for QMFWP and JDI, because of their plantations with this species, which can suffer stem defects from the insect attacking the leader shoots. Thus, it is through tree breeding programs and reforestation efforts of the forest sector partners that the results of this project will concretely translate and help improve and produce reforestation stock much faster, which command the establishment of efficient partnerships between researchers and forest sector actors.

Our second objective is to estimate and showcase the economic benefits of using FastTRAC technology and efficiently transfer this technology to the Canadian forest sector for a wide-scale uptake of the technology in the various tree breeding programs that are underway. The transfer will be made using an awareness-strategy targeting end-users. Specifically, we intend to 1) broaden the awareness of tree breeders and tree planters to FastTRAC approach and identify new user needs, 2) Demonstrate the benefits in carrying out economic and market analyses for various implementation scenarios and based on various productivity and resilience traits, 3) Develop options for user’s uptake models, and 4) Disseminate results of our research efforts. CWFC and FPInnovations will be the most closely involved in activities to raise awareness and transfer the technology to the Canadian forest sector.

Thus, the two main objectives of this project aim to provide Canadian conifer breeders with innovative tools that will provide more flexibility and efficiency to their tree breeding programs.